The Americans with Disabilities Act Reborn (2011) - A 2011 production of The McCalmon Group, Inc. that goes into detail about The Americans with Disabilities Act (“ADA”) and the important 2008 amendments including the sweeping changes that expanded what is considered a “disability” under the law. Jack McCalmon, Esq. hosts the presentation with Tom Hillis, Esq. as guest commentator.

Young v. UPS (2015) -A 2015 production of The McCalmon Group, Inc. that centers on the 6-3 Supreme Court decision of Young v. UPS decided in 2015. Jack McCalmon, Esq. hosts and explains how the decision will impact employers in regard to their accommodations to pregnant employees.

What Employers Can Expect for 2015 (2015) - A 2015 production of The McCalmon Group that examines in detail 2014 and what employers can expect for 2015 including litigation, judicial, regulatory and legislative trends. Jack McCalmon, Esq. hosts. 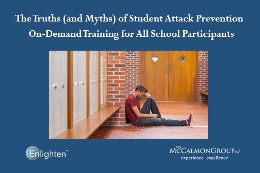